THE ADMIRAL AND OUR BEER -

One afternoon in Chau Doc, on a break from doing operations up to the Cambodian Border and back, we had a visit from a 2 star Admiral. I can't remember his name, but I wrote on the back of the picture I took "guy in charge of Cambodian mission". (I have later ascertained he was RADM H. Spencer Matthews, Deputy Commander Naval Forces, Vietnam.) 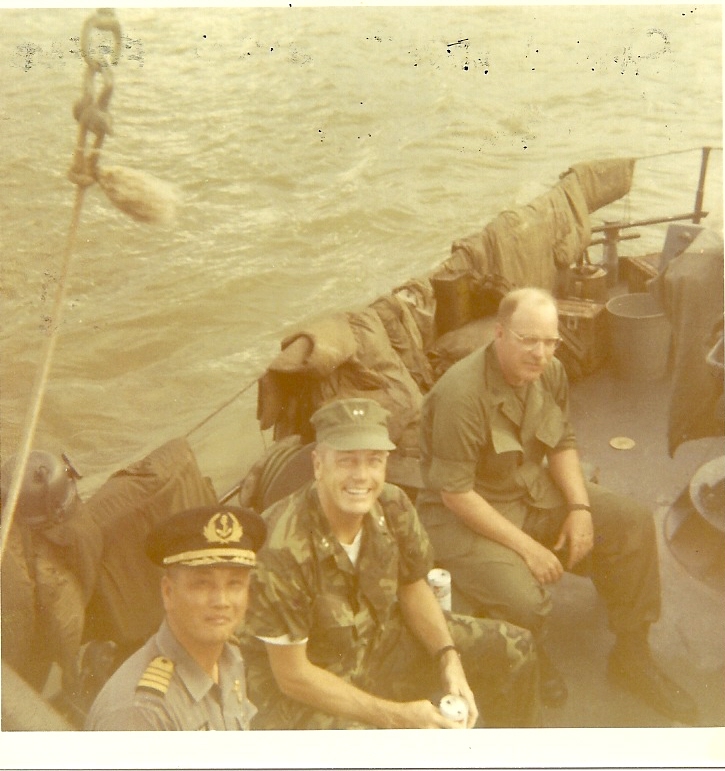 Anyway, he comes down to the pontoon tied alongside the YRBM where we tie our boats. He is walking around, glad-handing everyone he sees, telling us all how great a job we are doing, and other blah blah blah. Then, he steps aboard our boat and asks the OIC if we can take him for "a spin".

Well, why not - hell, we weren't doing anything anyway, just relaxing until the patrol later tonight. So he comes aboard with his aide, and a Vietnamese Navy Captain.

As soon as we are underway and headed down the river, he asked our gunner if we carried any beer on board. Without thinking, Gunner said, "Of course." So the Admiral told him to break it out.

We only had about a dozen beers aboard, just enough to get us through the night so we dug out a few and handed one to the Admiral, his aide and the VN Captain. As soon as they sucked them down, Admiral asks if we have any more. Of course, we had let the cat out of the bag now, so we had no choice but to keep bringing them beers until we were out. As he opened the last beer, he told the OIC to turn around and head back to the YRBM.

When we got back, he thanked the OIC for the ride, and walked off the boat, followed by his Aide and the VN officer. Did they offer to pay back the beer they drank? Hell no! Just another bunch of REMFs playing war and screwing the combat troops.