At one point in my tour, we were called upon to do the most disgusting, boring job we ever had to do. We were part of a two boat patrol near the Cambodia/Vietnam border, anchored in the center of the river, and our job, during daylight hours, was to count the dead bodies floating down the river out of Cambodia.

We did this the old fashioned way, we just looked for them with binoculars and for every body that floated by, we put a grease pencil mark on the side window of the pilot house. Every day, when it got too dark to see, we would stop counting and get ready for night operations.

Night operations meant keeping two people awake, and all the guns uncovered. This way if something happened, the two on watch could defend the boat until the rest of the crew got to their battle stations. This may sound somewhat exciting, but truth be told, in the entire 56 day stretch we were there, we never needed to defend the boat.

At sunrise, we would double the body count from the day before, to take into account the ones we didn't see because of darkness. Then we would erase the window, and start the cycle again. Fifty-six days and nights we did this, with very few breaks. Every 4th or 5th day, we would go to our support barge for about three hours, just long enough to take on fuel, water and food. Then it was back out on station so our sister boat could do the same thing.

There was always another boat on station with us, for cover. They also were counting bodies. Just to break things up, sometimes we would separate the river into right and left sides, and each boat would count a different side. Some days we would divide the day by hours, so we counted on the even hours, they counted the odd hours. Most times, though, we would tie up alongside and just count together. This would allow us to play cards, swap lies and bitch about how bored we were.

We came up with various ways to combat the boredom. I mean, you can only go swimming so many times during a day - not to mention it wasn't the most pleasant place to swim. There is a reason they call it the "Brown Water Navy." In addition to being a dumping ground for dead bodies, the Mekong River is the toilet for about a billion people all along the length of the river. As we had no showers, and fresh water was scarce on board, swimming was a last resort when you were just so hot and dirty you couldn't stand it anymore.

Sometimes we played a children's game called "spoons", only we modified is just a bit. We used forks. The object of the game is to put one less fork on the table than there are players in the game. Then, cards are passed back and forth until one player has four of a kind. At that point, he reaches for a fork. That is the signal for all players to grab a fork. Sort of like musical chairs, the one without the fork is the loser of that round. But rather than being out, they just got a letter by their name, and when they spelled out the word of the day, they had to "perform" for the rest of the players.

The word of the day changed every game, usually something like "asshole" or "shitbird" or something equally inane. The "performance" tasks changed often as well. We could be quite creative in coming up with penalties for the losers. One performance sticks out in my mind as one of the best. We had acquired a block of ice from somewhere, so the loser that day had to lie down on his back on the hot deck, and sing "God Bless America" with the ice block on his bare stomach.

Now I know that doesn't sound like much, but when you are bored beyond belief, stranded in the middle of the river on a hot muggy day - well, little things take on a much larger significance. 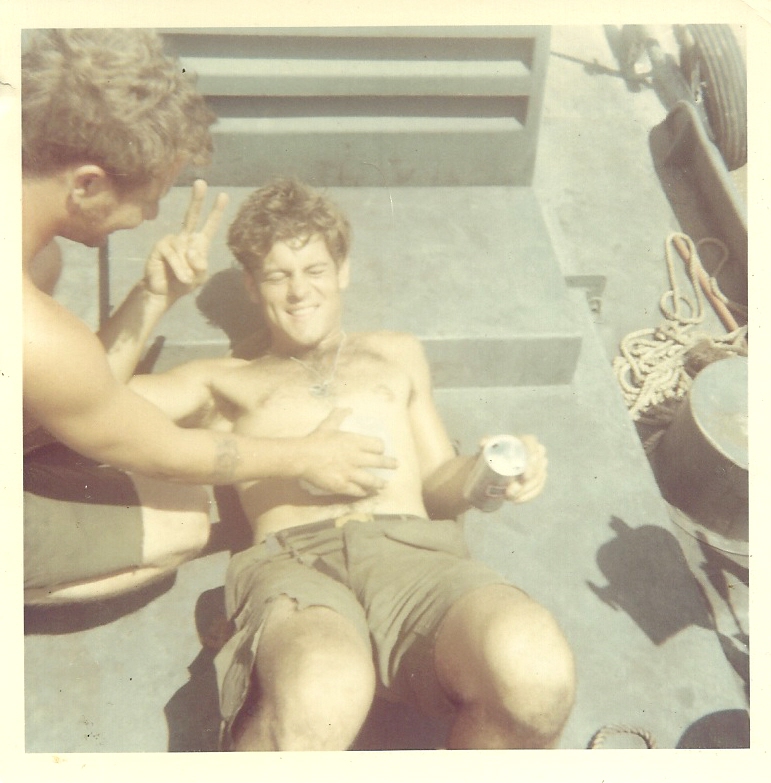 The "victim" here is John Michels. Sadly, his run on earth was cut way too short, and he passed away a few years ago.

Thankfully, our OIC would let some of the crew go ashore now and then for some unauthorized liberty. We would beach the boat near the village to let some of the guys off, and then come back a few hours later to pick them up. This was great - we got off the boat to stretch our legs, drink a few beers, eat some noodle soup and mingle with the local population - winning hearts and minds.

I used to carry as much c-ration candy and peanut butter as I could stuff in my pockets for those trips into the 'ville. I would also bring whatever foodstuff we could spare from our onboard stores. I gave the candy and PB to the kids, and the food to the adults. I figured if I gave some eggs or burger patties to the person making my noodle soup, I would be less likely to have it spit in (or worse).

In reality, the people in that little border town liked having the boats around. We kept the VC away, so they felt a little more secure. Not to say the 'ville was completely secure - we knew it wasn't, and that's why we always went in groups of 3 or 4, and were armed to the teeth - pistols, rifles, grenades, the whole nine yards. Fortunately we never had to use them.

After 56 days of this boring detail, we finally got a message to secure. Just like that - no relief, no debrief - just secure the patrol and return to our home base in SaDec. Little did we know in a few weeks we would be back up on the border, only this time we would be heading into Cambodia as part of a hundred (plus) boat armada.